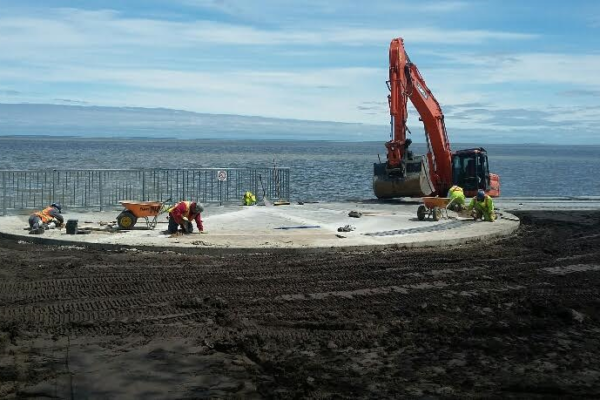 The Winnipeg Beach project is now underway! The job begins with removing the old concrete Seawall, after years of pounding waves the concrete structure was beginning to become more of an eyesore than anything. After the concrete is removed, we will begin to install the sheet piling….. the 1,000,000 pounds of sheet piling! Part one of the sheet piling process is estimated to take 1 month.

Once the new Seawall is completed we will be installing a large sidewalk and access ramps along the beach. The sidewalk project will have an interesting feature built into it, the ten foot wide sidewalk will have charcoal paving stones placed in the middle of the sidewalk with a gap in-between. This look will give the impression of railway tracks. The reason for this look is because in the early 1900’s a railway ran through the town often dropping people off at the massive amusement park that was once here. The large amusement park was once a huge tourist attraction for the area. It even held one of the country’s largest roller coasters at the time. Unfortunately in the 1950’s popularity started to wane and the park was closed in 1964.

The final step of the project is to lay a top layer of fresh sand along the beach. This is just one more great reason to visit the project upon completion!