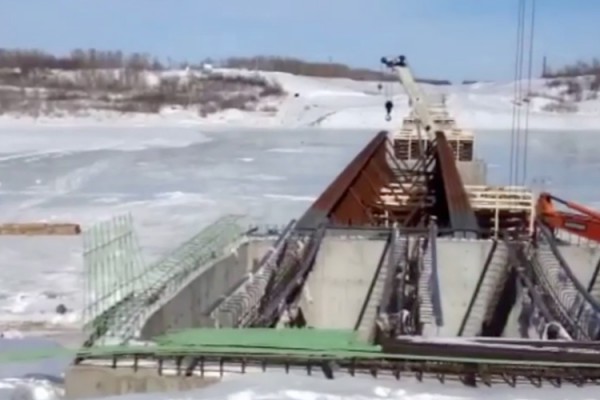 This steel bridge spanning the South Saskatchewan River is 300 meters (984’) long and consists of four spans, two abutments, and three priers in the river.  In total, there are three sets of seven girders and 18 mid air connections.  The girders are 26” wide, 11’ tall, measure from 129’ to 160’ in length, and weigh between 80,000 lbs and 94,000 lbs.  The girder connections consists of the girders being butted end to end with cover plates and secured with 160 1” bolts where every bolt has to be torque by the third or half turn-of-nut method.

We hired Dennis Crivea from Saint Louis to build up the ice on December 21, 2013.  Things moved along quite well with daily temperatures averaging -35°C.  By New Years Eve, Dennis had over five feet of ice everywhere on an area measuring 400’ wide by 900’ across the river.

The girders were loaded on two eight wheel dollies used side by side with the girders saddled down in the middle and the other end on the truck.  Two sets of high lift dollies were used for the first rig and a 16 wheel 14’ wide dolly for the second rig.

The south shore span was erected with our Sany 110 ton crawler crane sitting on the shore weighing over 200,000 lbs when fully dressed out.  At the other end was our 2005 Linkbelt 8690 90 ton mobile crane weighing 120,000 lbs.  The rest of the spans were erected by the Linkbelt 8690 being at the leading end of the girder and one of our Linkbelt 108 45 ton crawler cranes.  The 8690 would pick and swing and the 108 would pick and crawl into the position.

The first girder erected is stabilized to the top of the abutment by turn buckles and diagonal braces to the adjacent girder.  The leading end of the girder is diagonally braced with chains to the shoring towers.  Then the second girder is erected into place and all K braces and diagonal braces are installed.  At the shore, the girders are lifted with the hydraulic lift dollies for the crane to stay within its radius when hooking on.

The shoring towers are constructed out of three foot diameter pipe with a ½” wall and 12” four foot long steel beams welded to the bottom to give it a base.  One foot diameter pipe for was used for shoring stabilization.  The large pipe was dug into the ice with an excavator and set down onto the river bottom and left to freeze in place.  The 12” pipe was drilled with an auger on a skidsteer and also left to freeze.  We placed crane mats and timbers on top of the pipes to build our cribs.  We placed swamp mats to create a work platform 20’ in the air within three feet of the underside of the proposed girder elevation.  Four foot jack cribs were built out of 6’ x 6’ x 4’ blocks to support the oncoming girder and to place the 100 ton jacks for final girder elevation.  The girder connections access was built out of three stacked highboy trailers with railings attached which allowed the crew to work freely without having to be tied off.  There were three sets of shoring towers while the remaining mid air connections were made by the cantilever method.

The most interesting part of the project was erecting the last span with very limited access.  As with the South shore, the Sany crawler crane was placed up on top of the shore on solid ground and a small Linkbelt crawler crane on the other end.  We constructed a ramp out of wet snow almost 20’ tall and 100’ long.  When we backed the girder up the ramp with our 2013 Kenworth, the high lift dollies were elevated about eight feet high to get the tail end of the girder up and over the abutment shore area.  Once in place, the cranes grabbed the girder, hoisted, and crawled into place.  When backed into place, the girder at the north end was over 30’ higher than the truck end.

Afterwards, the job of tensioning more than 5000 bolts began.  We started with tensioning all the bracing bolts as we had to determine the proper elevation of the girder connections prior to tensioning.  We adjusted the elevations relative to what the piers and abutments were built to.

All in all, the project of erecting girders progressed quite smoothly.  This project was thoroughly planned out from the start and was well directed by our site supervisor: Bill Hopkins.  Each morning, there was a production and safety meeting led by Bill while our equipment was warming up.  We had a crew of about 20 with a vast range of experience working with one common goal in mind.  This project was completed with approximately 5000 man hours and no safety violations.  It was a pleasure and a treat to work with Rashid Ahmad of WSP Canada Inc. and the talented Canada Bridge crew.