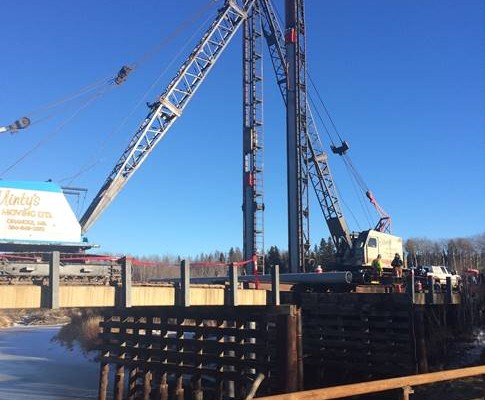 The Red Deer River Bridge Project began at the beginning of December. The job began with  making a temporary bridge on the south side of the road and then removing the large existing four span bridge. In constructing the new bridge, we had to re-landscape the edge of  the banks and lay rip-rap to protect them. The new three span bridge is now in place, which is approximately 140 feet long and 32 feet wide.

Throughout every job we will be faced with our fair share of adversities, most of which we can control. One struggle we have been having is the terrible weather! We have had many days when the weather has been hitting temperatures of -35! The weather never stops us but it always has its negative effects, such as, starting equipment in the morning or parking it at night can always be difficult when everything around you is frozen solid!